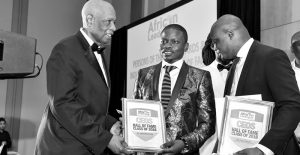 As all understood the class and excellence of prophet Bushiri, time and again he proved it. Yes, on the Monday night service, Bushiri surprised all at ECG church by bringing US gospel superstar Todd Dulaney to perform live in his church.

The ‘Victor Belongs to Jesus’ hit maker, Todd Dulaney is a globally acclaimed worshipper and a all time favorite selling gospel artist whose songs and albums have always topped the US billboard charts. It is known fact that his shows are always sold out and mostly expensive owing the level of class he puts up with his live band whenever he is on stage.

Todd Dulaney’s performance in the ECG church stage is not just for church members and viewers across the globe, but also gospel music followers across the world. This program by Todd Dulaney in the ECG church was an electric performance which cemented yet another character of ECG leader prophet Bushiri who is known for class and excellence. ECG spokesperson and SBI communicator Ephraim Nyondo told Nyasa times that prophet Bushiri, being a classy and globally acclaimed man of god, is a preacher who loves his people and he endeavors to also connect them to the best.

‘He knows it’s not easy for every ECG member to watch Todd Dulaney live on stage because his shows are expensive. The prophet also understands that Todd Dulaney music is a darling to most ECG members. Bringing him, therefore, was just a way of a gift to his members to experience a superstar they only see on TV’ he said.

Nyondo added that besides that, Todd Dulaney is a great follower and admirer of prophet Bushiri and his coming also was to experience the ECG leader with his own eyes.

To say something about Todd Dulaney, he is an American gospel musician and former baseball player. His interest in music dragged him to create ‘pulling me through’, which gave him a breakthrough released upon a billboard gospel albums chart. Then he went on to release another album in 2016 called ‘A worshippers heart’, and this took him even higher on the gospel albums chart.